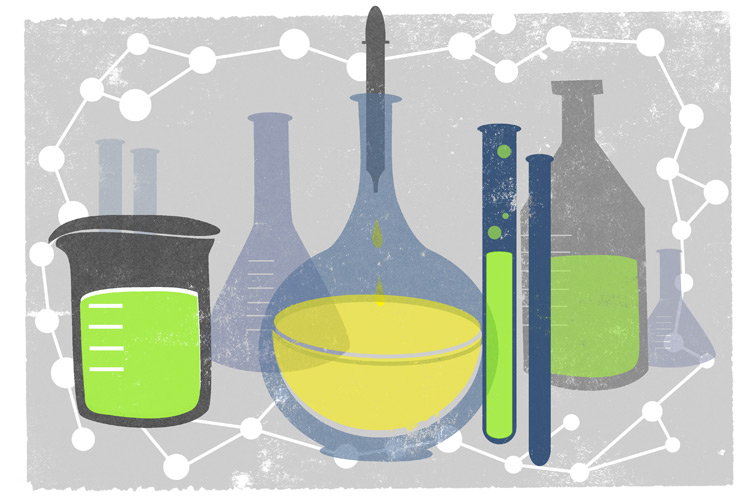 Introductory chemistry, or CHE 105, strikes fear into the hearts of many University of Kentucky students.

As a gateway course to quite a few majors on campus, the Department of Chemistry in the College of Arts & Sciences provides a large service component to nonchemistry majors.

"Students change their majors because of chemistry; they do badly on the first exam and withdraw," said general chemistry director Stephen Testa. "As a chemistry professor, I feel bad about that. I don't want chemistry to be a dream crusher."

Recitation sessions typically include a review of difficult concepts, weekly quizzes based on homework and time for questions, increasing the time students have to spend on chemistry problems.

"Students are also exposed to concepts twice and from two different viewpoints," explained Testa. "Recitations keep students on task and on time, and quizzes force students to do their homework early."

Students in a 60-member pilot were divided up into two groups of 30 for weekly, one-hour recitations with a graduate teaching assistant last fall.

The students self-selected into the pilot, knowing that they'd have more work, but the class included a broad range of high-performing students from high school, as well as students who had previously failed the course, according to Testa.

"Students can do this," he said. "They just come in a little lost and with a lot of other academic burdens."

According to Testa's pilot project, students taking a course including recitation had a DEW rate [rate of D, E or withdrawal] for Chemistry 105 of 20 percent, compared to the departmental average of 30 percent.

"The data is encouraging, and we're happy about it," Testa said. "Many kids come in capable but underprepared. The more time on task, the better they'll do."

Testa also followed the 60 students into their second semester of chemistry, where they did better on average on exams and received better grades. In fact, most students from Chemistry 105 wished that there were recitations in Chemistry 107.

"It was clear to me from student discussions and my course evaluations that the students found the recitations useful and that they overwhelmingly thought that all chemistry sections should have the recitations," said Testa. "They did not seem to mind the extra time and the extra work involved if they found it useful in learning the material – which they did."

UK junior Christina Nguyen first took CHE 105 the fall of her freshman year, but dropped out after an unsuccessful first exam. "I knew that I wouldn't be able to get the grade I wanted," she said. "I actually switched my major and career path because of the difficulty of the chemistry class."

Last fall, as a sophomore, Nguyen decided to try chemistry again, and she signed up for Testa's recitation course. "I knew that it would help me study and stay on track with my work," she said.

Every week, Nguyen had quizzes and homework for recitation class on top of her general assignments. "Although it was extra work, it helped me so much because I was studying chemistry every week and actually learning the material," she said. "Also, recitation was about 20-25 students and I felt very comfortable asking questions."

Nguyen plans to finish her psychology degree and possibly add a minor in chemistry as well. "I would have never thought of doing that," she said. "Recitation was a huge part in my success in CHE 105."

While the small pilot was a big success this year, lecturer Kim Woodrum will be testing out the recitation program on a normal-sized chemistry class of 250 students. This class will be divided up into nine groups of 30. The department hopes to offer recitation for all 1,800 entering Chemistry 105 students beginning fall 2012.

Graduate students typically run the recitations, so the additional session will necessitate an increase in the number of teaching assistants under the Department of Chemistry's charge — a situation that Testa doesn't see a problem with. "Many chemistry graduate students want to become faculty," he explained. "They need to experience the running of a classroom, so we'll have no problem filling teaching spots."

Student success is worth the resources put into it, said chemistry chair Mark Meier, who also credits the support of College of Arts and Sciences Dean Mark Kornbluh in the departmental endeavor.

"It's a challenging balance, but with energetic faculty and Dean Kornbluh's cooperation, I have high expectations," Meier said. "These students need guidance, and breaking them into smaller groups has really helped. The recitation is doing what we believed it would."

In addition to his work as general chemistry director, Testa leads a research group focusing on DNA and RNA structure; he's a biological chemist that's been at UK for 11 years.

"Directing general chemistry is a lot of work, but it's rewarding," Testa said. "Students want to pass, and we want to do everything we can to help them. It's a win-win-win — for professors, administration and students."