This lecture series commemorates Professor Dawson's leadership in the Department and features speakers noted for the quality, depth and breadth of their research. 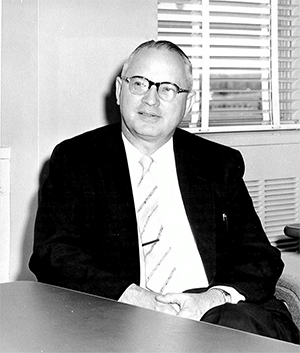 Dr. Dawson served in several academic positions in Illinois, Wisconsin, Nebraska and Louisiana and also worked on the Manhattan project as a Research Chemist and Group Leader in the Metallurgical Laboratory at the University of Chicago. In 1946, he was awarded the War Department's Certificate of Merit and a U.S. patent for his efforts on the Manhattan project which led to the discovery of a fundamental process for the extraction and purification of the elements plutonium and neptunium. He was a member of the committee that organized the Oak Ridge Institute of Nuclear Studies and was a council member of the Institute.

Professor Dawson came to the University of Kentucky in 1945 as Chair of the Department of Chemistry. He provided key leadership in initiating and building the doctoral program in Chemistry at the University. For example, in his first decade in the department, he individually obtained the major portion of extramural research support. During his twenty five years with the Department, he held contracts for fundamental chemical research with the U.S. Army, the National Science Foundation and Atomic Energy Commission.

He was a talented research director and had a special ability to imbue his students with a concise, clear and complete scientific writing style. He published more than fifty research papers dealing with the chemistry of non-aqueous solutions and co-authored a reference book on the subject.

Dr. Dawson was a master teacher both in the classroom and in less formal conferences and discussions. His leadership and mentoring led many graduate teaching assistants and junior faculty members to become more effective teachers. His uncompromising devotion to high achievement standards in course work, research, education and training set the tone for our Department for years to come.

Another significant contribution to the Department was Professor Dawson's indefatigable advocacy for a new chemistry building. His leadership in soliciting and designing a replacement for the former Chemistry building, Kastle Hall, culminated in the opening of the current Chemistry-Physics Building in 1963.

He also served the campus community in other ways. Dr. Dawson was elected a Distinguished Professor in the College of Arts and Sciences in 1954-1955, and was appointed to the rank of Distinguished professor in the field of Physical Chemistry by the University of Kentucky Board of Trustees in 1956. He served as Acting Dean of the Graduate School in 1954-1955, 1956 and 1960-1961.

Dr. Dawson's twenty-five years in the Department represent a truly outstanding combination and balance of administrative leadership, teaching, research and service. Although Dr. Dawson passed away in 1976, his impact on the Department continues to this day. The endowment of the Lyle Dawson Lecture Series by his beloved daughter, Venita Dawson Curry, permits us to rejoice in this legacy and to continue our traditions of world-class chemical research.

You can find event information on our calendar.