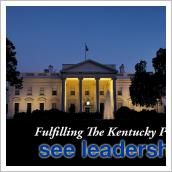 This semester, students at the University of Kentucky are learning about American leadership and democracy as it unfolds.

An interactive course, "UKC 180: America Through the Lens of the 2012 Election," utilizes an innovative classroom design and extensive multi-media resources to focus on the upcoming presidential election. Through lectures, guest speakers, in-class polls, group work in "caucuses" and interaction with real congressional staffers, students are gaining a deeper understanding of American politics, and addressing relevant issues in real time.

Mark Lawrence Kornbluh, dean of the UK College of Arts and Sciences, and Kathi Kern, history professor and director of the Center for the Enhancement of Learning and Teaching (CELT), are teaching the course.

"Most of our courses in the college are focused around disciplines, and how disciplines organize knowledge, so we are interested in turning this inside out," Kornbluh said. "We wanted to take a current issue that was really pressing for students and explore all of the different aspects of that issue, in a way, open up the liberal arts education and the disciplines in the college from the issue. What better issue than the current election?"

The course, designed for first-year students, aims to facilitate high-level discussion in a nonpartisan manner and to explore how elections really work. The focus spans across historical data from past elections, including voter demographics, important cultural issues such as religion, women's rights and civil rights, to the key challenges that the nation faces for the 2012 election. The last third of the class will look back on the election after the results are confirmed and examine policy implications for the future.

Kornbluh said that a crucial factor in the course is that it facilitates a space for students of all political viewpoints to become more informed. It also helps students make new connections to fellow students and faculty.

"The organizing principle for the course is to have students belong to a caucus," Kern said. "So we are simulating an important part of the American political system. They’ve named their caucuses, and they are going to work in them the entire semester. We hope that that will allow us to do a lot of engaged learning in the classroom, but also that it will reduce the anonymity that our students talk about in big classes."

Throughout the semester, the students have also engaged in town-hall style Skype interactions with two actual congressional staffers, one from each major political party. Michael Higdon, chief of staff for Kentucky Congressman Hal Rogers; and Matthew Dinkel, communications director for U.S. Congressman Mike Doyle, both interacted with the students digitally.

Students will complete projects addressing various topics in the realm of American politics and elections. One assignment involves predicting the outcome of a set of elections by researching existing data, covered in the course. Students will be graded on the methods and resources used to make the predictions.

Students will also interview people in their families or communities about the first election that really mattered to them, or in which they felt greatly invested.

"We hope to get them thinking about where they come from politically, what the commitments of their families and communities are, and why certain elections stick with people as being pivotal in their own personal stories," Kern said.

The course will also facilitate discussion through a film series, offered for extra credit. Students have the opportunity to attend presentations of politically focused films and blog about their reactions and the insight the films provide into the topics discussed in class.

"As important issues come up in real time, the course itself changes," McNary said. "It's interesting because it didn't change what I thought, but it changed the route that I took to come up with what I thought."

Kornbluh said that one of the most exciting, albeit challenging, parts of the class is that the election takes place only two-thirds of the way through the semester.

"This obviously makes it difficult to plan, but we do know that we are going to do retrospectives and analysis after the election," Kornbluh said. "The students will go back over the same material and see how the variables that we talked about played out."

Kornbluh and Kern both said they were very pleased with the hard work and enthusiasm that the students have demonstrated thus far.

"We hope that this course opens the door to the excitement of what this university has to offer students," Kornbluh said.

To listen to a podcast, produced by the College of Arts and Sciences, in which Kornbluh and Kern discuss the course, click here.

To listen to a podcast, produced by the College of Arts and Sciences, in which students discuss their experiences in the class, click here.

To view a video, produced by the College of Arts and Sciences, of Jim Duff's lecture, "Presidential Campaigning in Historical Perspective," click here.